Washington’s state primary is close at hand. Which means now is the time to pick the two people in each category of office who will compete for our vote in November and lead us into the promised land of better times.

I think that is important.

Consequently, I’m being conscientious in my public duty to scrutinize those who feel they have the qualifications to bring us out of these dark times. And as you can see in the photo above, many feel their time is now.

But I might be part of the problem. As friends and family, both familial and of the Facebook variety, lamented the less that heroic response of our elected officials to these difficult times, I suggested that if they have the answers then they should run for office. Many, though none I know personally, took that advice. 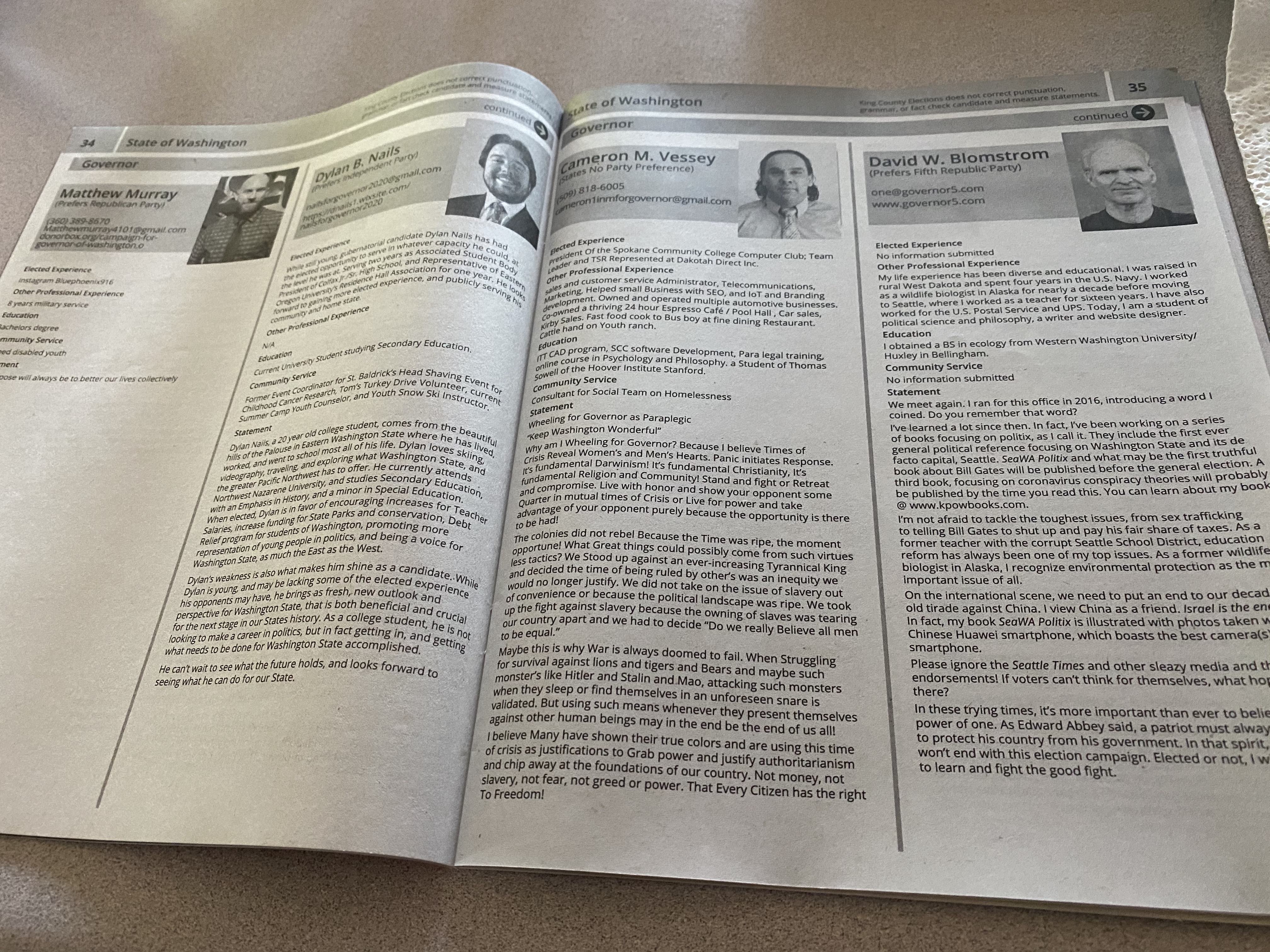 36 people are running for governor. There are Democrats, Republicans, split into regular, pre-2016, and Trump factions, Socialists, Greens, Propertarians, American Patriots, Independants, Fifth Republic, and unaffiliated. Some submitted statements; some did not, which isn’t particularly helpful, but this assumes a certain seriousness on the part of the candidate and his/her/they’s campaign.

Most do not have any experience in government. Some may see this as an asset, but unless they have experience in large organizational systems, with many being independant with their own mandates, I don’t see how they’ll be a functioning governor. However, to most, that seems beside the point.

And that may be why more people are running for governor than any other position in the state. At a time when competence, organization, and leadership are more important than ever, you have to ask what exactly is the point of running for an office for which you are uniformly unqualified. We’ve had nearly 4 years of that at the national level and it’s turned into a catastrophe of epic proportions-though it sometimes may not seem that way when our media focuses on too many tangential topics, like the name of a celebrity’s baby, but the economic tsunami continues unabated and is upon our shores whether we acknowledge it or not.

We have no choice but to deal with them.

So why are all these people running for governor rather than, say, their local city council? Wouldn’t that be the place to start if you’re serious about public service? Which then begs the question of are they serious in this at all, or is it a stunt? One candidate, Goodspaceguy-yes, that’s the name he runs under-has been running for just about every office in every election I can remember since I moved here 35 years ago.

As far as I know he has not been elected so far, but he’s pretty well known now as a gadfly candidate.

Some will counter that it doesn’t matter who wins, that it’s all rigged and we’re all screwed. That may be fine chatter while you’re crying in your beer, or when the world isn’t falling in on our heads, but sometimes it’s important to go for those who want more than simply seeing their names in the voters pamphlet.

Academy of the Heart And Mind

Welcome to a world of emerging writers.